Anyone who saw the Cataract Gorge during the recent June 2016 floods in Launceston, Tasmania, saw a sight they may never forget!

All of Tasmania was caught up in a drought that caused the countryside to shrivel up and die.  It is normal here on this southern island for dry summers and wet winters.  So the summer of 2015 came and went with normal lack of rain, to be followed by a winter where the expected amount failed to come.

Thrust back into summer again, and although sometimes the skies looked threatening they only produced “6 spots” as I call it!

Summer faded into Autumn and still no rain to speak of. I remember when out mowing the lawn on the ride-on mower, the ground was still so dry that sometimes I had to stop to allow the clouds of dust pass on by.  That was in May, this year… 2016.  In June, the sky fell!  I’m sure you’ve heard the saying… “it never rains but it pours!” 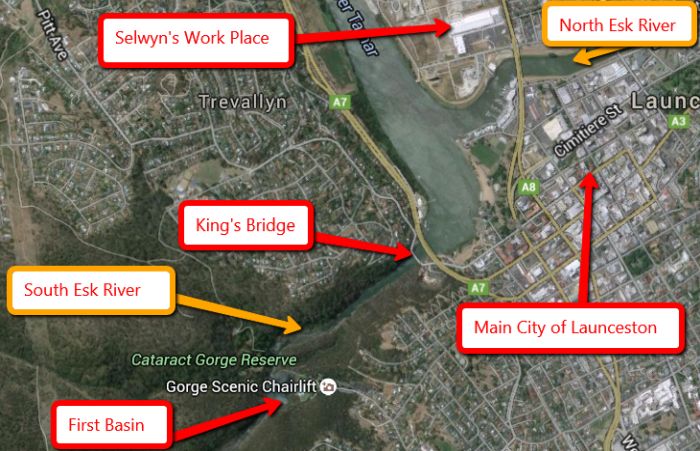 Now as Launceston city is built where three rivers meet… both the North Esk and the South Esk, converging into the River Tamar.  Both of the Esk rivers are fed from high mountains, one from the left and the other from the right.

Back in 1929 Tasmania’s most devastating flood happened right here in Launceston.  Much of the low lying areas disappeared under water. Bridges came down and people lost their lives.  It was a tragedy.  Following that awful time, the city began building levy banks which fortunately enough, this June, held fast.

My husband’s work place is built on this same low-lying area and although they were evacuated for a few days, there were no problems thanks to the levy banks.

On the second day of the flooding, we were fortunate enough to be able to view some of what was happening.  I had seen a little of it broadcast on the telly and was keen to see it for myself… just as long as there was no danger to me or to others in doing so.

What an amazing sight it was to see this.  I was a little disappointed it was low tide, but six hours later it would have been dark, and even as it was there were parts we were unable to get to as they had closed them off.  Fair enough… safety first.

Up Cataract Gorge to First Basin

After viewing the water spewing out of the South Esk River, we drove up to the First Basin.  I’ll let this video show you what we saw:

Two weeks later we went back to see what it was like.  We knew they had been doing some massive clean-ups but were surprised how clean the area looked.  It was really cool to walk on over to the suspension bridge and to be able to see quite clearly the exact level of the flood at its highest.

Here is a demonstration done by the City of Launceston on the depth of the water during the flood.

I dare you to walk across that!!!  Here is Duck Reach Power Station which is not used for power anymore.  This suspension bridge, together with the other suspension bridge at the First Basin, were both washed away.  Makes me wonder if the levy banks would have held up in Launceston against something like this.  The South Esk River is really quite narrow as rivers go, but my goodness, it packs some water down it when it wants to.  The city water supply dam is upstream from here, and of-course it was flowing over also.

One final video.  Don’t you love the images taken by drones?  I sure do… they allow you to see far more than is ever possible normally.

It never ceases to amaze me that people from the mainland (Australia) or “northern island”as some call it down here :-)… talk of Tasmania as always being “cold and wet”.  The truth of the matter is that Hobart (the capital of Tasmania) is the second driest city in Australia.  Adelaide apparently is the driest of all.  Hobart is but 2 hours journey south from Launceston.

Have you ever been to this particular area of  planet earth?  If so, leave me a message in the comments section below.

I hope you’ve enjoyed me showing you the Cataract Gorge.  It’s a great place to visit and it’s just right there!  I promise you, it’s not always flooded. Actually Launceston, Tasmania has some lovely things to offer if you ever come this way.