Ducks Trained and Intelligent is a story about how I began with a few ducks and although found them hard to train at first, they gradually began to tune into me, and me into them.  They understood, in time, that I meant them no harm.  This is important if you want to gain their trust.  Basically you need to always be the same around them as they don’t respond well to sudden changes.

I had to teach my ducks to swim in water 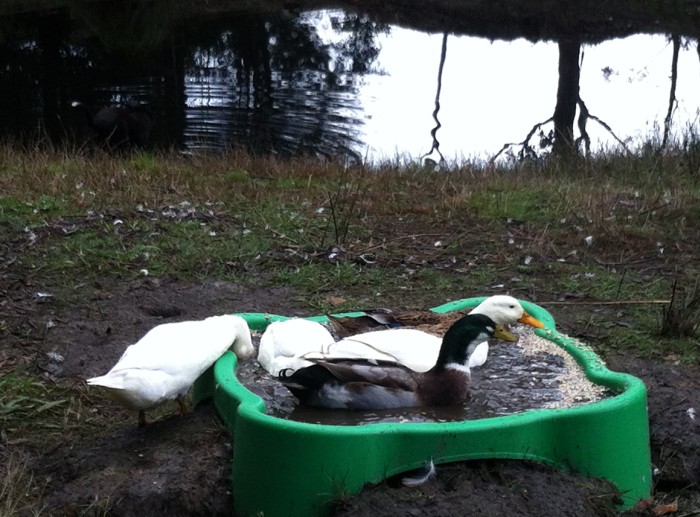 In  ‘Teaching my Ducks to Swim!’ I explained how my first five ducks were unfamiliar with swimming in water.  Everyone naturally connects ducks with water, and most would find it difficult to believe that you would need to teach them to swim.  But guess what?  That’s exactly what I had to do.  You will see how I gradually introduced them to the joys of swimming… strange, I know, but that’s how it was.

I remember thinking back at that time that ducks are a little difficult to train.  I had to be ever so patient with them as it took about five to six weeks to train them into the water of our dam,

But since then, I’ve discovered they are generally not that hard to train  These days I can quite easily separate one duck from another. 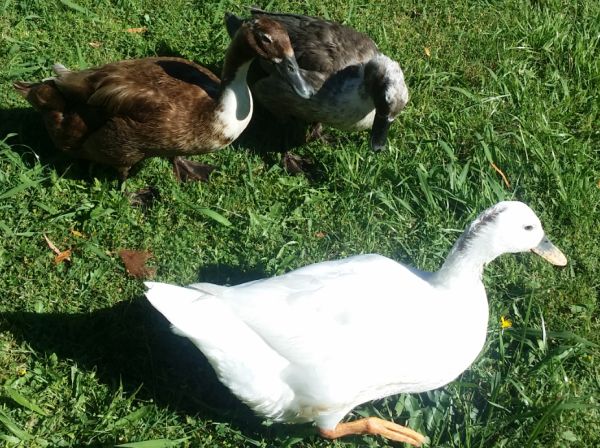 I find the drakes to be over amorous and too excitable about mating with a female.   They play with the duck for some time before actually mating, with play that’s not particularly nice.  Part of what they do is pull feathers out of her neck and the back of her head.  If they come back to her later in the day and her feathers have already been removed, they still grab her skin in their bill inflicting much pain.

So because of this action, I find during the mating season I have to separate the drakes from the ducks.

Into a pen of their own

At night, the drakes go into a pen of their own, while the ducks go into their normal pen.

In the morning, I let all the ducks out, but the drakes have to remain penned until around midday or one o’clock during daylight savings.  This works out to be the middle of the time I allow them to free range.

When I go down to the pen during the middle of the day, I take with me some seed that I’ve sprouted.  Sprouted seed contains a lot more nutrition than dry seed, so it’s very good for them.  I give it to all the birds… chooks, guinea fowl and ducks.  Even the sparrows begin to clap their hands in delight over any they can manage to scrounge!

Now when I arrive with the seed, all the ducks come running.  In fact, many days they sit and wait for me in the shade of our apple tree.

Down to the pens we all go.  I take a big handful of the sprouted seed and call the ducks.  “Come on, Ducks!” I call.  All the girls run into their pen where I throw the seed and shut the door.

Then I go and let the drakes out.  They are super excited and full of anticipation for some action!

I go back to the pen of ducks and open the door just a little way and out run the three or four ducks that I allow to run with the drakes.  The other four ducks don’t even try to come out.

Remember the reason they are in the pen, and need to stay, is because of pulled out feathers which can become scabby sores on their heads.  They need to remain in the pen for the afternoon so the drakes cannot get to them.  I usually throw them some more seed to keep them quiet.

In the evening when it’s time to lock them all up again, sometimes the drakes are waiting to go into their pen.  On other occasions, they are a bit more hesitant and I have to go round behind them to encourage them to move towards their pen.  Sometimes they go straight there, but other times I use hand signals to guide them.

There are occasions when a duck or two will try to follow the drakes, but I simply put up my hand, holding it sideways, and the girls will automatically move away while the drakes continue into their pen.

When I call the ducks, only ducks come

When I call out “Ducks!”, all the ducks will follow me, but all the other birds, chickens and guinea fowl, don’t come.  On the occasion when a chicken or guinea fowl gets caught up in the rush of ducks, they always stop before entering the duck pen.

Likewise, if I call out “Guinea Fowl!” and shake the feed container a little, all the Guineas come while all the rest stay behind.

When putting them away, I begin with all the birds gathering around me with their collective voices letting me know they are hungry, but I can divide them all up and put them where they need to be, generally without any problems at all.

People talk about a ‘bird-brain’, but I find that all these actions display a wonderful level of intelligence, and it certainly makes my job a whole lot easier.

My son sometimes comes down and watches in amazement as I work with the birds.  He calls me ‘the Bird Lady!’

I believe with all my heart that you need to learn to understand the birds and tune in to their needs.  Occasionally I might miss it, but most times we are able to communicate together, woman and birds.  They have become my friends and  know it, and therefore totally respect me… most of the time. 🙂

So I won’t allow anyone within my hearing use the term ‘bird-brain’!  Nope, never!  Ducks can be trained.  It can take patience, but it’s amazing satisfying when their intelligence shines through and they all

begin to do what you’ve been training them to do.  I love it!

Do you have domestic birds on your property, or in your back yard?  I’d love to hear of your experiences, so please share.