The guinea fowls miracle happened one day when I thought I had lost forever my two new girls.

It happened this way…

Owing to a wrong ratio I had between males and females, I needed to purchase two new girls.  I had two bachelor boys crying out for some female attention, so I had to get onto it pretty smartly. 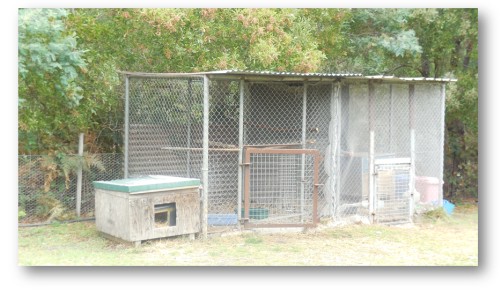 Onto the Internet I went… Gumtree, where I found someone willing to part with two girls.

I picked them up, and on returning, put one in a pen with Streak, and the other in another pen with Silver.

This was to teach the new girls that this was now home, together with trying to bond them with their particular male.

I didn’t know how it would go as I hadn’t done anything like this before, but I had been advised to keep them penned, without letting them out at all, for two weeks.  If you know anything about guinea fowls, you would know that this is particularly hard for them.  They are a wild domestic bird, and like their space and freedom.

How to care for Guinea Fowls

A time of perseverance

Never-the-less, we all persevered until the time was up.

As I had five males and only two females, I needed to fix up the ration.  Someone asked to buy one, so that left me with six… four boys and two girls.  Now I had two more girls so there was a mate for each of them.

Now previously I had raised seven little guinea keets here on the property, and I kept them penned until they were eight weeks old.  These little ones had never known anything different so I don’t think they would have found it too hard.

The two girls I named: Lavender (a silver coloured female) and Rose (she had a pink tint around her neck).

When the time arrived to let them out, I first decided on Streak & Rose.  How would it go, I wondered?

I left it until fairly late in the afternoon as I wanted them to only have an hour or so out before they would start looking for their bed.

Out they came, and almost immediately, over came the other guineas to see them.  Now of-course they were all familiar with Rosy and saw her in the pen every day, multiple times in fact, as they passed on by, but the rush frightened her and she took to the trees.

Before I knew it, she went from one tree, to another and left our property heading for the west, far, far away!

It was terrible, and the worst part was, after two weeks of being penned, Streak was now without a partner again.  It made me so sad, I couldn’t believe how wrong it went.

Preparing to let them out

After that bad experience I wasn’t going to let the other two out, so they remained penned for another couple of days while I tried to work out what to do.

We got the idea that if we cut her wing, it might help.

It wasn’t fun cutting her wing but we finally managed and it gave me a little more confidence about letting them out.

I waited until late afternoon yet again, and all went well for awhile.  The two of them were walking around together enjoying the taste of the grass they had been longing for.

But after awhile, something frightened Lavender, and guess what?  Yes, she did what Rose had done.  Up over the fence, across the road, over another fence and off through the paddocks to the south.

The last I saw of her she was flying up into some trees on the far side of the paddock.

Now Silver joined in with Streak as they both cried about their loss.

Rose had been gone now for three days.  We didn’t ever see her, or hear her.  As far as I was concerned, they were both gone forever.

What on earth am I going to do with my two bachelor boys?  They are not happy!

That night, when I hopped into bed, I lay there thinking about the situation, feeling quite helpless.  I really didn’t know what to do.

So I prayed… ‘Dear Lord, please send them back!’

I can tell you this… it was not a powerful, faith-filled prayer.  Not in the least, but all I could muster up at the time in my defeat.

The next morning I was woken by a call, and as I listened I realised I was listening to a female guinea.  As I knew I had locked up the guineas the night before, I wondered how come the sound was so loud.

I jumped out of bed and peeped out through the curtains.

There she was!  Rose had returned!  I couldn’t believe what my eyes were seeing!

I rushed down and let Streak out, who immediately ran over to her and the calling ceased as they began to walk around the property like any truly bonded pair.

Can you imagine for a minute how I felt?

Could this really be true?

A little later on it occurred to me that I was listening to an insistent female call.  Was one of my girls caught or something?  I’d better go and take a look.

I saw Silver running over to the fence, then back and around in a flurry, so I went to examine what was going on.

I didn’t let myself even hope, but then I saw her… Lavender had also returned!

There she was, running back and forth on the other side of the fence.

You know, she flew out over the fences, cut wing and all so I didn’t too a very good job with that, but on her return she couldn’t work out how to get back over.  Mind you, she would have had to cross the fence on the paddock across the road.

Anyway, I went next door and managed to shoo her over the fence and then the rejoicing began.

Silver and Lavender also began to walk around together like nothing had happened.

Rose had been gone for three days, and Lavender overnight… but here they return from two different directions on the same morning, with only a few minutes between them.  That’s what I call – a miracle!

All day I couldn’t but help rejoice and thank the Lord for sending my two girls back home.  I was ever so thankful. 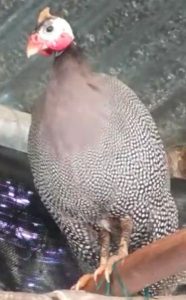 About a week later I was devastated when Rose died.  I had noticed that her call had changed a bit but other than that she seemed fine.  I remember remarking to my son that her call sounds a bit like a squeaking door.

If this sign was something that should have made me act quicker, I actually doubt.  It is my belief that while she was out in the wilds she picked up a tick.  I found a little mark on her body that suggested that a tick may have been there.

Guinea fowl are renowned for being tick eaters and they can help to protect from Lyme Disease.  But it occurs to me that if a tick quietly crawled onto her and burrowed down through her feathers to find her flesh, the damage would soon be done.

The mark I found would have been very difficult for her to reach, and from previous experience with dogs and ticks (not here on this property, but where I used to live) I can pretty much recognise where a tick has spent a few days gorging on blood.

Losing Rose, especially after such a wonderful miracle, was hard to take.  I had just lost my miracle girl, and so had Streak!

Poor Streak was back there yet again! 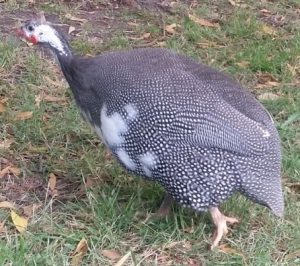 So I bought another female, a pied which I named Sally to go with Streak.

Once more back into the pen for two weeks.  I used to apologise to him every day and encourage him to hang in there.

When the time came to let them out I had to be much wiser than before, so once again I chose late in the day but made sure all the other guineas were in their pen.  This gave Streak and Sally a good time together before they went back to sleep in the pen again.

I continued to pen Streak and Sally in the top pen, with most of the other guineas in the bottom pen.  I mainly did this because of the way the other two boys would run at Streak and give him a hard time.  Don’t know why, they just always did.

The two silver birds used to go to bed with the chickens, so everyone was sorted according to their needs.

Sally continues with us today, but Streak eventually died of unknown causes, and broke my heart because we had such a wonderful relationship.  But that’s another story. 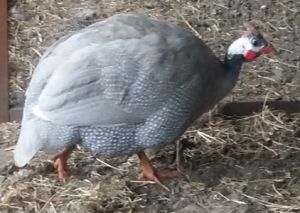 Later on, during that mating season, Silver decided he didn’t want Lavender anymore, so he turned his eyes to one of the other girls.  He fought the required battle and claimed his victory, leaving two birds confused and very sad.

This is how they remained for the rest of the mating season that year.

Lavender became very ill and died.  I have no idea why.  Was she egg bound?  Never having experienced that with any other bird, I still don’t know.