I have to tell you that my rooster has a dirty little secret!

I’ve talked of my rooster before and I have nothing but praise for him.  He has to be one of the kindest, gentlest roosters on God’s earth.

I call him Roosty, nothing too original, but that’s what he was already called when I picked him up more than four years ago.

Roosty knows how to look after his girls as a true gentleman, especially during the mating season.  He finds all these lovely titbits as they are free-ranging around our property and immediately calls his girls to come take a look.

They quickly run over as they know it’s first in, best dressed!  Many times he really does have a lovely worm or something that he’s found, but sometimes he does it just to entice them over to him.  He likes to play!

Jumps on to my knee

He will eat out of my hand, in fact, I’ve had him jump right up onto my knees to do so.  This is something I don’t encourage as he does have big claws which I’m not too fussed about having on my bare legs.

But, even if he’s in the middle of eating out of my hand, he will stop immediately if one of his girls comes to check out what I’m giving him.  He will not eat while there’s any chance that one of his girls wants to eat.  Strange really, he could so easily eat with her at the same time, but he won’t.

Of-course, during the moulting season it can be a different matter.  I’ve seen him tell them where to get off as he eats for himself.

Roosty is always on the look-out for predators, especially those from the sky… hawks and eagles.  Immediately he’ll warn the flock so they can run for cover.  As I also have guinea fowl and ducks, there is usually quite a bit of warning going on.

I’ve never had a time where I’ve been at all afraid of Roosty as he’s always lovely and friendly, not like other stories I’ve heard about some roosters!  He’s finally allowing me to run my hand down his back without him freaking out.

One day, one of my hens ‘Whitefeather’, (now passed away), became mum to three chickens.  It turned out that two of them were males with one female.  Eventually I found a new home for the new roosters, but I kept little Katie.

She was a beautiful little girl, wearing a bright copper coloured cape around her shoulders, with the rest of her being shiny blue/black.  As I like to name my birds according to something represented in them, she became Kate… which was derived from the word ‘cape’.

All seemed to be well, but one day something really terrible happened.  Something loathsome and nauseating.

I had noticed a couple of times that when Roosty went to mate with Kate (or so I thought), she would ‘go down’, with wings spread for his attention.  But, instead of mating, he pecked at her head.

As I was there, I soon chased him off, so no real harm was done.  But I didn’t imagine he really did have it in for her.  Oh, if only I had realised, but because he always has such a wonderful nature, his evil intent didn’t sink in at the time.

My rooster has a dirty little secret!

Then one day I found Kate in an awful state.  Her head had been so pecked and swollen that I thought she was missing an eye.  I was so horrified, but I knew instantly who’d done it… that rotten rooster!  She was also missing quite a lot of feathers where his feet would have been clawing at her.

As it turned out, I had a special pen I used as a hospital for my birds when necessary, so I placed her there after treating her head with some Manuka Honey.  The poor little thing was obviously in so much pain but she somehow managed to keep going.  It was a tough time for her, as a hen with only one seeing eye is quite frightening.  She was always turning quickly trying to ascertain her surroundings.  She couldn’t tell if someone (the rooster maybe) was creeping up on her.

But I was totally delighted, after a time, to see her eye finally peep through from behind the wounds… at least she still had it there.  After that she healed up fairly quickly.

I couldn’t understand why he would do that, but for some reason I began to suspect it was the colour of her cape that he didn’t like.  I don’t know to this day if I’m correct or not, but it was a suspicion that formed within me.  You see, all the other hens are black.  Some have a little of that colour on them but nothing like she did.

So I had a decision to make… what to do?

I began to let them take turns to be out free-ranging.  I’d keep Kate locked up in the hospital in the morning, and then lock Roosty in the main pen up for the afternoon.  He was a bit grumpy about it, but who cares?

Finally I decided to give Kate to a friend who had some chickens.  It went very well, as from about day two she formed a close relationship with the rooster and all was fine.  I was so happy for her… really, very happy.

Oh dear, but unfortunately calamity struck.  My friend has a visit from the eagles and Kate was one that they flew off with.  I was distressed because she suffered so much at the hands of other birds.

A time came when another batch of chickens were hatched.  This time there were three females and one male.  One female was jet black so I called her ‘Ebony’, another female had some lacy looking feathers around her neck, so of-course, she was named Lacy. 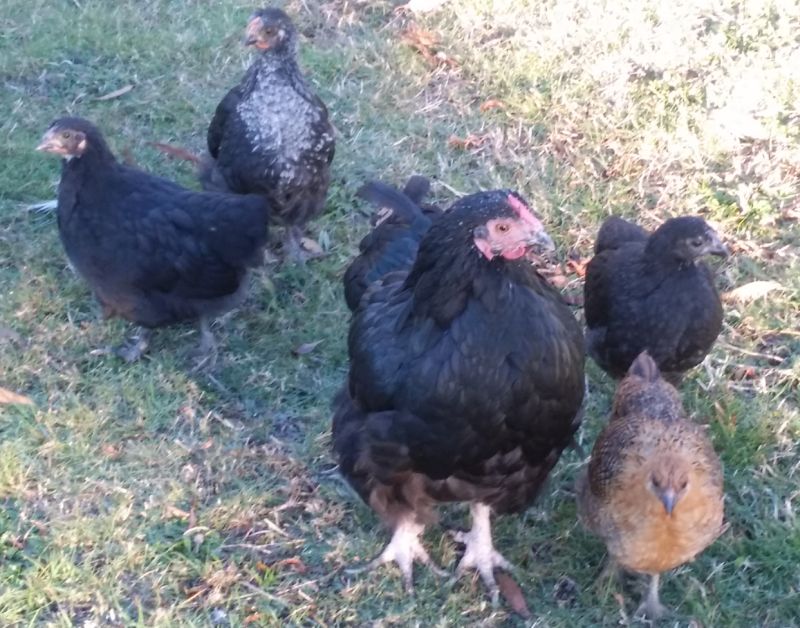 Now the third female was a colour I had been dreaming of and never, ever thought I would receive from all my black hens… a hen totally covered in rich copper feathers!  Oh how beautiful she was, the older she grew the more lovely she became!

I got to thinking… now if my theory about the copper colour is what is annoying the rooster, he will not be pleased with Coprice, my copper coloured bird.  My fear turned out to be correct… it was alright while she was young, but as the time for mating approached, it happened…

On my return from the city, I went down to the pens to change their water.  This was when I noticed that Coprice wasn’t around.  Where was she?  I started calling her, and then I heard a sound coming from over by the fence.  I rushed over, and oh no!  There she was with her head thoroughly pecked… a horrible big hole right in the top.

As I picked her up she gave the most frightfully, distressed call you can imagine.  My son who was with me, demanded I put her down as he thought I was hurting her.  I told him I couldn’t as she needed to be treated and hospitalised.  She continued crying mournfully.

Once again I treated the wound with honey and kept her safe in the hospital.  I’m happy to be able to say that within a few weeks you couldn’t even see a mark on her head.

I’ve noticed a difference between Katie and Coprice though.  When Katie was in the hospital, or even later when she was still locked up while the rooster was out, the rooster would run at her even though the wire was between them.  To begin with, Katie would always jump, but as she realised that he couldn’t actually get to her I was quite pleased to see how her reaction changed.  He would rush at her, and although her head may have been just centimetres away from him, you would see her hold still.  She’d look right into his eyes as if to say ‘you can’t get me!’  I saw this many times.

On the other hand, Coprice is such a loving little girl, and obviously so forgiving, she cannot imagine that he would really do her any harm.  I’ve seen him run at her, but it’s like she can’t believe he means any harm so she doesn’t react.  Of-course, she is always on the other side of the wire netting.

I think my theory is correct

Now my theory of the copper colour being the problem, which I might add, comes directly from the rooster himself,  is pretty much confirmed.  Since then, we’ve had another chicken, this time totally black, and the rooster accepts her without a problem.

As you know, when a hen lays an egg she likes to let the world know of her deed.  When this happens, Roosty, when he hears them, runs to them… I guess he wants to congratulate them.   Sometimes when a number of them are laying around the same time, it keeps him fit running from one to the other.

But when Coprice lays her egg I’ve watched as Roosty remains where he is and simply listens.  He will not go to her.

I’ve had others tell me that in their experience, roosters and hens can be racist.  I guess I will never know for sure.

As you can imagine, I’ve just about wanted to wring his neck with my own bare hands.  No-one here can take it upon themselves to actually do the deed and kill him, and I don’t feel I can give him away.  If I did, how do I know when another copper coloured chicken will be butchered.  All because my rooster has a dirty little secret!