‘Where my Guinea Fowl sleep’ is an interesting question!

Basically they all sleep in two pens which the previous owners of our property used as dog pens.  They work really well as they are made of very strong cyclone wire, with concrete floors.  All I had to do was add a few perches.  After a time I added some weed-matting to keep the wind off them, so now they sleep quite snug.

I added some bird netting to one pen as I used it one time to house my mother hen and all the keets when they were young.  They were all so little they could have easily climbed out through the cyclone netting.  The birds have pulled it about since so that’s why it’s a bit ratty.

The only thing I don’t like about the pens is that the doors were made low for dogs, and not for a human to enter in and out.  The birds, of-course, have no problems, but I have to bend very low to enter.

Because they have concrete floors they are a fairly easy clean.  I clean out all the manure and then run the hose over the floors.  After they dry, I usually like to spread some hay around.  It makes it nice for them, but during the day the chickens like to get in there and scratch it out!

Where my Guinea Fowl sleep

This is an interesting point because it changes from time to time.

This year, as I’ve shared in Guinea Fowl Behaviour  my guineas are taking different partners and it’s all a bit of a mix-match.  As they generally like to sleep with their partners (mates) I’ll tell you what their current sleeping arrangements are.

Usually I put the ducks away first and then the chickens.  Once they’re away, I take a half scoop of seed and walk over to where the guinea pens are.  I like to talk to them and they usually chatter right back.  In fact, it’s often the time the males whistle a cute little whistle that I love to hear.  I’ve not heard the females do it, but they may.  It’s so soft and gentle and let’s me know of their contentment.

I don’t know if all guineas whistle gently like this.  I remember talking to someone who was supposed to be an authority about Guinea Fowl and she had no idea of what I was talking about.  It really surprised me at the time.  I must say, I do tend to hear it mainly from the silvers.

As I’m walking over I say… ‘Come on’, and they come.  I rattle the seed in the scoop and they know exactly what I mean by it.  They all run.  The males generally run with their head held high, while the females tend to hold their heads down low.  Sometimes I’ve been known to run with them, just for fun.  I tell them I’m going to beat them over.  They all start running… naturally, completely outrun me!

Anyway, as I approach the pens, I always say ‘In the pen, Gray, in the pen!’  Gray always runs into the bottom pen.  Pied follows him and a couple of the girls.  I give them one handful of seed per bird and shut the door.

The other pen used to belong to Streak before he died.  The other males would never allow him to sleep in the same pen as them.  Usually one or two girls would go in to spend the night with him.  But currently, because I no longer have Streak, I’ve given the top pen to Silver as the other males will not accept him into their pen so he’s much better off by himself.  Of-course one or two girls always go in there with him, so he’s never alone.

That leaves just one guinea I’ve not explained yet about his sleeping arrangements… Stirling, my second silver guinea fowl, and the latest to join the flock.

Let me back up a little… I’ve told you that Silver sleeps in the top pen, and so he does at the moment.  Previously, Silver always slept with the chickens.  Originally, way back when he was just a tot, the other guinea fowl males used to drive him off.  He became very lonely and took refuge with the hens.  There was one hen in particular who became his best friend.  I’ve called her “Aunty’ because of this.  He’s a great mate of the rooster too.

A game of bluff!

He regarded the chickens and the chicken house as his territory and he’d drive the other male guineas out.  This all sounds fine, but with just one problem… he can be a bit naughty!  All but two of the chickens are afraid of him as he will chase them and grab their tails!  Even with all this, I still allowed him to sleep with the chickens as he appeared to act differently at night time… most of the tail-chasing was done in the day time, especially if I was giving them food.

I watched one day as he attempted to chase one of my bigger hens ‘Bluebell’.  She turned on him and told him in no uncertain terms to stop!  He never, ever, worried her again.

Another hen, in fact my biggest hen, must have done the same at some time as he never chases her.

I think he like big birds… Bluebell, BB & Roosty are all quite larger than him and he totally respects them.  The rest of the hens are of smaller stature and none of them realise it’s all just a game of bluff.  I truly believe that if they stood up to him, it would be all over.

Gray and Pied do a lot of tail-chasing as well when they are coming together for food.

So, where does Stirling sleep?

Back to Stirling.  He, at this point of time, does not chase the chickens.  They all know it and will eat with him side by side with no problems.  It’s so lovely to see.  So, I lock Stirling up with the chickens at the present time as I don’t think any of the males would tolerate him in the pens with them.  We’ll see as time goes on.

On rare occasions I’ve had the guineas sleep in the ‘Guinea Tree’.  This is the tree that’s opposite the pens.  This usually happens when for some reason they won’t enter the pens.  Why this is, is not always clear, but I’ve learned a few things along the way…

Some colours are unacceptable 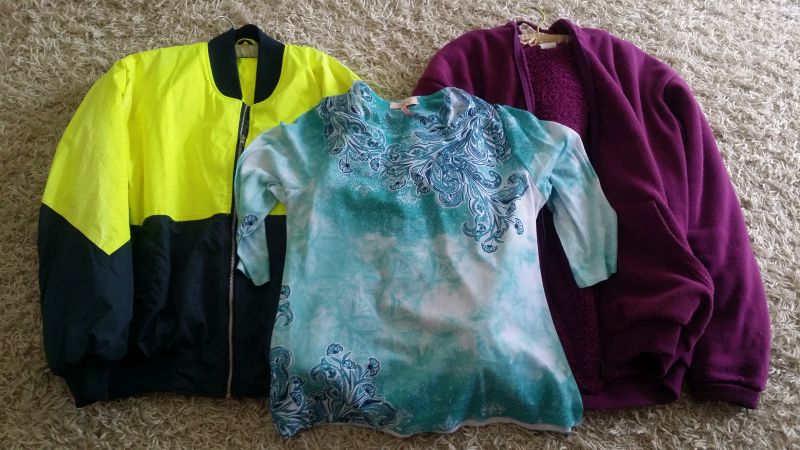 There are certain colours that the guinea fowl do not like and there’s buckley’s chance of putting them in the pens if I wear them.  Of-course, all this is trial and error… but I’ve found that these garments are totally unacceptable to them.

What they do is begin to chortle (that’s what I call it)… loudly… the same call they make if they perceive there is danger around… like a hawk, or an eagle.  (They’ll even do it at the neighbour’s dog!)  They begin to run around and just go bolistic and will not allow me to go any where near them, feed or no feed.

Do they always go to bed where I want them?

If for some reason I don’t realise quick enough that they don’t like what I’m wearing, they will head up into the Guinea Tree and usually that’s it for the night.

I do not leave any feed around.  They are only fed if they go into the pen, and it’s the same with all my other birds.

I’ve had occasions when at least one duck (or up to all of them), decide to spend the night outside of the pen.  They head for the dam and once they’re there, there’s not a thing you can do about it.  They will not budge!

Go with the Flow

I’ve learned not to worry about it, but I do make them pay the consequences as they don’t get fed.  No way!  They have to do the right thing or no there’s no tucker for them that night… that’s the rule!  I can tell you, by the time the next evening comes around, all of them are more than eager to enter their pen.

There has never been an occasion when the chickens won’t go to bed… I can simply leave the pen door open and they’ll all put themselves to bed once it’s time.  I’ve done this occasionally, especially if I’m waiting for Stirling to come over, or something of that nature. Then all I have to do is go back down a little later and close the door.

I’ve learned, as I’ve gone on, to relax a lot more and ‘go with the flow’.  Although most of the time I understand what their needs are, there are some times when it’s not so clear.  I can remember trying my hardest to chase a guinea into the pen, and no matter what I did he/she would not go in.  At first I couldn’t understand why, but I soon learnt that they will not enter into a pen that contains a guinea they are not getting on with.  You can chase all night long but they will not go in.

The important thing to do is to spend time learning their ways.  And I can tell you… once you think you’ve got it all worked out is exactly the time there will be a change of some sort.  This is where you need to try to tune into their needs and ‘go with the flow’.

I consider myself most fortunate that I only have seven or eight guineas because I’m able to learn to understand what is going on.  Do you know… I know someone who has over one hundred guineas… and I’m absolutely quite sure he wouldn’t have the foggiest idea what is going on… not like I do.

I hope I have been of assistance is helping you understand where my Guinea Fowl sleep.  This is what has worked for me.

Do you have Guinea Fowl, and if so, what sleeping arrangements do you have for your birds?