Why do my chickens go broody on me?  What’s happening?  What are they doing?

When you have females around, the time comes when you will be dealing with broody hens.

I have three types of fowls…

They all act a little differently when broody.

A rooster can easily handle a harem of females.  In fact, there can be trouble in the camp if you have more than one rooster.  Believe me, the fighting can be bloody and fierce.

Chickens and their Personalities

These guys prove the eggs were fertile as non-fertile eggs don’t have a hope of hatching, even if the hen sits on them forever!

These two young roosters were so close to each other.  I had one female and two males who, once the mother had decided they were old enough to look after themselves, all got around together.  The two roosters used to sit together on my railing.  You’d think that nothing could come between them.

A time came when they both started to fight who should have the rights over the hen… Katie.  As it turned out, Red won the battle, but not before he had caused a lot of bleeding on my other boy… Buffy.  Once they had settled their argument, they closed ranks and became close brothers again.

It had me nervous though, and I very soon found homes for them so it couldn’t happen again.

Why Chickens go Broody and what does she look like?

Once a hen goes broody, she will sit on her eggs for 21 days until they hatch.  She sits there in a trance… eyes open staring straight ahead.  If you approach her, she’ll start, as she’s been off with the fairies!

Some of my hens never go broody as its obviously been bred out of them, but most of them will have a turn.  Some of them will go broody multiple times per year.

Ebony is once again broody right now.  She’s been broody for weeks but I keep taking her eggs, much to her disgust!  Poor thing, she can’t help herself… she just has to sit.

But she’s a feisty little thing!  Man alive!  She goes from being a sweet loving, hold-in-your-arms chicken, into a growling, pecking heap of feathers!

Most of them I can handle.  All I have to do is slip my hand quickly on the back of their neck and allow two of my fingers to slip down over each side of her neck.  This allows me to pick her up or to slip my other hand in to take the eggs.  No problems.

But Ebony is another kettle of fish indeed.  To make things worse, she always sits with her head to the front of the nesting box so she can get a really good go at me if I come along.  It’s very hard to get to the back of her neck when she’s there just waiting, ready to attack!

Because of this trait, thus far, I have not allowed her to be a mother.  But she is the most determined of them all, slipping in and out of broodiness within weeks.

I used her on three occasions to hatch a brood of eggs as she was just perfect.  She would let me pick her up and never once tried to bite me.  I was able to move her if I needed to and she’d just continue to sit until her time was up.

I ended up losing Whitefeather (named because of a few tiny little white feathers on the top of her head), because she ended up in a fight with another hen.  The first fight was with Top Chook.  I just happened to go down to the pen and found the girls locked by the beak and both nearing exhaustion.  I put a stop to it, so they both recovered.

Another time I went down and I found BB (Black Beauty, Big Bird) who is my largest hen, at least twice as big as little Whitefeather, fighting.  It was not pretty, and obvious that BB could win the battle.  BB was becoming broody and therefore her nature changed.  She was normally an extremely placed girl and I would never have believed she could turn into such a bully.

Interestingly, I could do anything I liked with her.  She allowed me to pick her up at any time and not once tried to peck me.  But she would growl and complain… I call her ‘grumpy pants’ when she gets like this.

One evening the two of them must have gotten into a fight and to my utter dismay, Whitefeather’s neck was broken.  Whitefeather was simply protecting her eggs as yes, once again, she was broody too.

It’s made me realise that two broody hens together is not a good thing, owing to their remarkable change in nature.

Since that time, the only other hen I’ve allowed to sit was Top Chook.  She sat on two eggs, of which only one hatched and produced Silhouette. 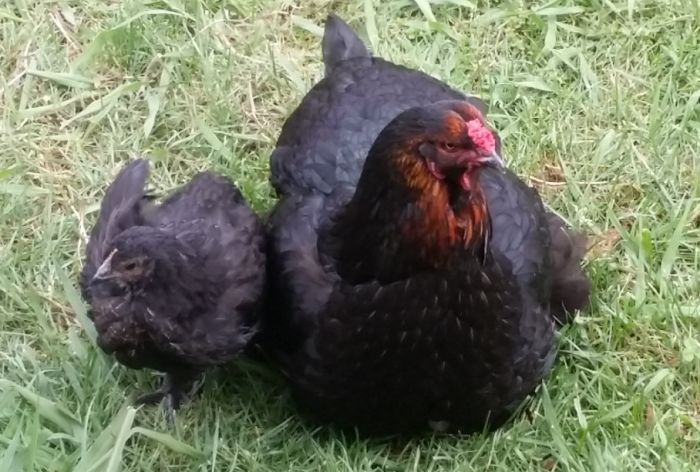 When they become broody

When they’re broody, they fluff up their feathers and move about when feeding saying ‘book book’.  This is when you know for sure she’s aiming to raise some young.

I find you need to force the hens to come off their nests at least once a day.  If not, sometimes they will forget about eating or drinking, which is just not good for them.

Usually I do this in the evening when I go to feed them.  I simply pick up the hen and place her beside the water trough.  She drinks and then gets down to feed.

I’ve observed that when a hen has a few chickens, when she considers them to be old enough she no longer really has anything to do with them.  This is except for Top Chook and Silhouette.  I think it’s because Top Chook had only one chicken, and she’d be extremely lonely if she couldn’t spend time with her mother.  Now that Silhouette is growing up, they are not together all the time, but I often see them walking around together.

As Top Chook (called that because she’s the matriarch  of the pen), doesn’t peck Silhouette the same way as she will the other birds in her endeavour to keep her position on top of the pecking order.  I like that.

It’s just something she has to do!

So why do chickens go broody?  It’s after the hen has been laying eggs and believes it’s time to sit on them and hatch her young.  She doesn’t just lay eggs to give to us, if fact, nothing is further from her mind!  Her eggs are supposed to be her way of making sure that there will always be chickens for generations to come.  She will sit on her eggs whether or not they are fertilised.  I don’t think she’s made the connection between the two.