It was a lovely day… a little overcast to start with, but perfect for a nice walk.  We live near Launceston and I’m showing you some of the wonderful Tamar Valley Discover Trails that I’ve found. Today was the day we’d chosen to walk across the Batman Bridge, Tasmania which crosses the Tamar River.

So Who Was Batman? 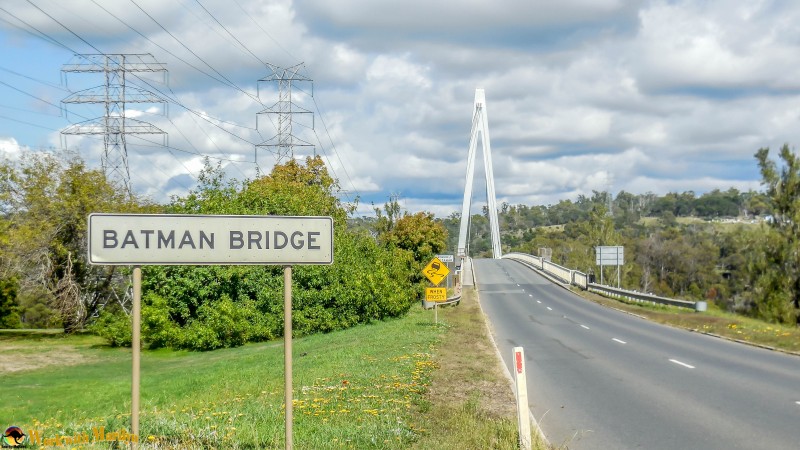 Tasmanian history is quite fascinating.  Life was really tough in those early times, and although Tasmania was gradually being settled, most mainland Australia remained a perfect mystery.

The first settlement in Australia was in Botany Bay, Sydney, NSW on 26th January, 1788 .  In 1803, some of the convicts (those who had committed petty crimes back in the United Kingdom) were sent to Hobart, Tasmania where despite everything, the colony flourished.

A couple of times they’d tried to set up a colony where Melbourne now stands, but they’d failed miserably, what with lack of water and enormous problems with the natives of the area, so they gave up.

Eventually in 1835,  John Batman. a grazier, entrepreneur and explorer, led an expedition across the Bass Straight (that’s the water separating the Australian mainland from Tasmania) where he eventually found the Yarra River.  He made a successful deal with the local aborigines and so from such humble beginnings Melbourne grew.

This bridge was named after him when it was opened in 1968.

It’s the indigenous name for the Tamar River.  The name is on the sign out of respect for the aboriginal people.

Why Did They Choose This Spot?

You can see from the map above, how all the water has to squeeze through this narrow section of the river, four times a day with the changing of the tide. Two times in and two times out.

It was logical to choose this place as it was one of the narrowest parts of the river and positionally would serve the movements of the people well.

What Year Was the Bridge Built?

The idea to build a bridge across at this point was first discussed back in the mid 1940’s.  They began in 1966 and eventually after much head-scratching, the bridge was opened in 1968.  It was one of the first bridges of its kind built in the world, and certainly the first cable-stayed bridge in Australia.

It’s a long way down to the ground below.

The building of this unusual bridge was quite a feat.  You see, on the western side of the river its solid dolerite rock provided a wonderful area for very strong foundations, but on the eastern side, it was a totally different story. There it was only soft clay which was not strong enough to support a large bridge such as this.  So what to do?

So How Did They Build The Bridge?

This is where ingenuity comes in to play.  It was decided to lodge a large steel A-frame structure into the solid dolerite rock.  This leans right out over the river.  Later when they attached the cables, it was able to carry almost 80% of the main span of the bridge.

To really see how it was all accomplished, we decided to take a walk across the bridge, and then follow Auld Kirk Road along the river.   What we saw on this walk was a hundred times more than you can see by just driving over it.

What a wonderful walk it turned out to be.  Apart from the obvious benefits of walking exercise, you have the wonderful opportunity to really see what’s around you.

The A-frame reaches high into the sky and can be seen for miles around.  Many people like to build their homes where they can see the Batman Bridge in the distance.  It really stands out.  As you can see, the bridge itself has been constructed out of light and very strong steel.

Driving under it in a car you miss the wonder of the work that’s gone into the bridge!

As we continued along Auld Kirk Road towards Sidmouth, we found  this delightful old church.  “Auld Kirk” meant “old church” to it’s Scottish forebears.  It was built back in 1843 by both convicts and free labour.  Looking at it I couldn’t help but wonder if the convicts did all the hard manual work while the “free labour” people took care of the simpler titivating!

Convicts were the people of the time who had been “convicted” of petty crimes.  Often times it was for as little as stealing a loaf of bread when they were desperately hungry.  These men and women had been shipped from the United Kingdom for a minimum of seven years. Virtually none of them returned.

These people were responsible for building most of the buildings in Tasmania in their time, many of the convicts in chains, or even connected together in chain gangs.  Those days were terrible indeed, but they have left us with some amazingly beautiful buildings, many of them still in use today.

Just down past the church is a little lighthouse monument type structure. It’s strange really, as it looks a bit like a rocket!  I was keen to see what its origins were.  Apparently, because of the water dangers of the area, and because there was only one lighthouse over the other side of the river, the then minister of the Auld Kirk church used to shine a light in the front room of his cottage each night to assist any who may be out on the water. He sounds like he was a kind heart-ed man.

Each part of the Tamar River is a different width, with some quite narrow points and some very wide areas.  This is looking into a little bay off the main stream of the river.  A quiet place to anchor your boat.

There are so many whirlpools in the river, particularly on the northern side of the bridge, in the area called “Whirlpool Reach”.  They happen each time the tide changes and are quite easy to see.

We had met a man who lived a little way up to the north of the bridge in a little bay.  He told us the story of way back in the sailing ship days, the ships had to anchor in his little bay and wait for the right tides so they could pass through Whirlpool Reach.  Apparently, if they didn’t wait, the ships simply turned in circles!  Personally, I’d be very careful taking a boat through there.

Watching hundreds of Jelly Fish flowing out with the tide from the Batman Bridge, Tamar River, Tasmania

As we were walking back over the bridge again we were watching the water to see if we could see any life.  As it turned out, we saw hundreds, and I mean hundreds, of jelly fish.  Wow, I wouldn’t want to be in the water!  They sting!  Anyway, as the tide was on its way out, the jelly fish really only had to allow themselves to be swept along in the currents.  I bet a few of them went round and round as they hit the whirlpools!

It reminds me of one day when we were young.  My parents took all us young ones out for a swim in the later afternoon.  We arrived at Wyong Creek at a place called Chittaway Point.  I remember my brother and a couple of our cousins racing towards the water… “Beat you across to the other side!” they yelled.

Into the water they dived, swimming furiously to the other side.  But…when they were about half way across there was much hollering because the water was full of jelly fish.  LOL, I always remember it with a grin!  Bet they were more careful in the future!

It was nice to see the wildlife as we walked back along the road.  Tried to take a photo of the wallabies hopping by but unfortunately they were just too quick for me.

Do you have wonderful places to walk where you live?  Have you ever taken the time to really suss out your local area and to enjoy what nature has to offer?  Please leave me a comment down below and share it with me…

What a wonderful walk we had that day.  It’s really quite addictive!  I would recommend that if you are ever in the area you should take some time out to enjoy this Tamar Valley Discovery Trail.  You couldn’t find anywhere to be more interesting than the Batman Bridge, Tasmania.