One of the benefits of walking exercise is that it can take you to discover new and fabulous things.  We had driven past a certain point many times and I  had mentioned time and again… we must explore up there!  You see, there were interesting ruins to see of the water wheel flour mill just up the river a little bit.  Just 127 years ago the Supply River Flour Mills closed down.  This mill was the first of its kind in Australia.

Where are the ruins of the Supply River Flour Mills?

First off let me explain that I’m talking about the island state of Australia called Tasmania.  Bass Straight divides Tasmania from the mainland of Australia. 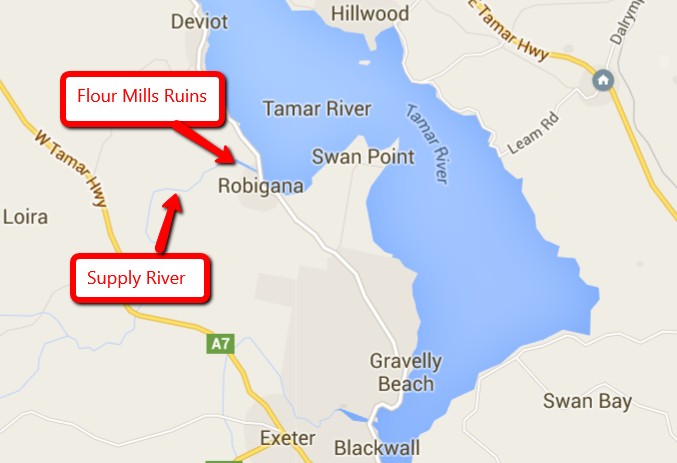 The Tamar River Estuary runs from Bass Straight in the north through to Launceston, a distance of 70 kilometres, and roughly about half way down, a river flows into the Estuary from the left.  Its name is Supply River. There’s a little waterfall that divides the fresh water from the salt and it’s at that point the Flour Mill was built.

I’m going to share this with you as one of the Tamar Valley Discovery Trails I’m putting together for you. 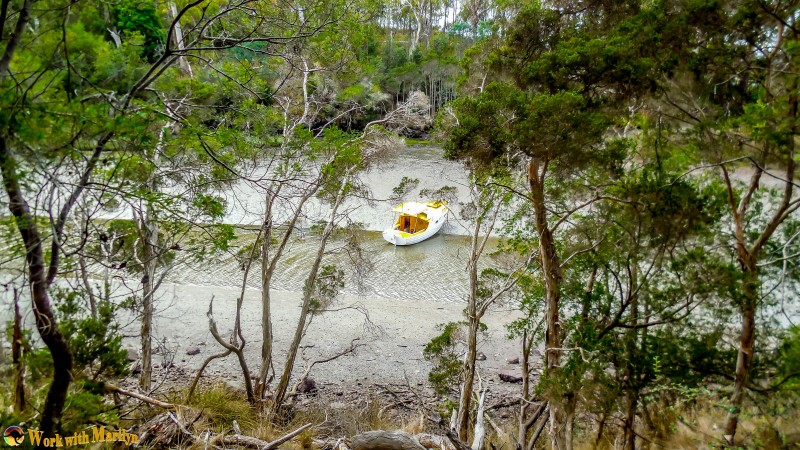 We parked near the bridge and walked along a 400 metre track on our way to find the ruins.  Only 400 metres!  On checking from the bridge later we could actually see the ruins but they are fairly hidden owing to overgrowth.  Wow, I could hardly believe it was there all the time as we just drove on by!

We walked up beside the river, and as you can see, the tide was almost at it’s lowest ebb.  Only a little stream remained.  The little yellow and white boat lay stranded in the mud. 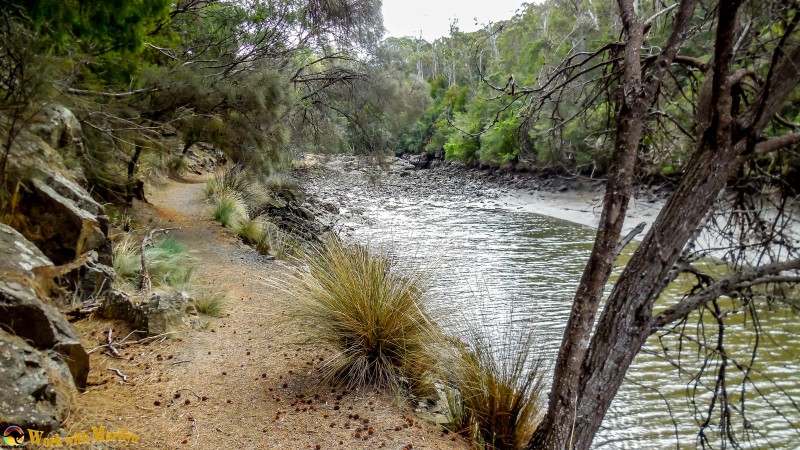 Continuing up the track, the river bed was covered with rocks with only a trickle flowing through.

After a Full Day’s Journey we found the Ruins!  Just Kidding! 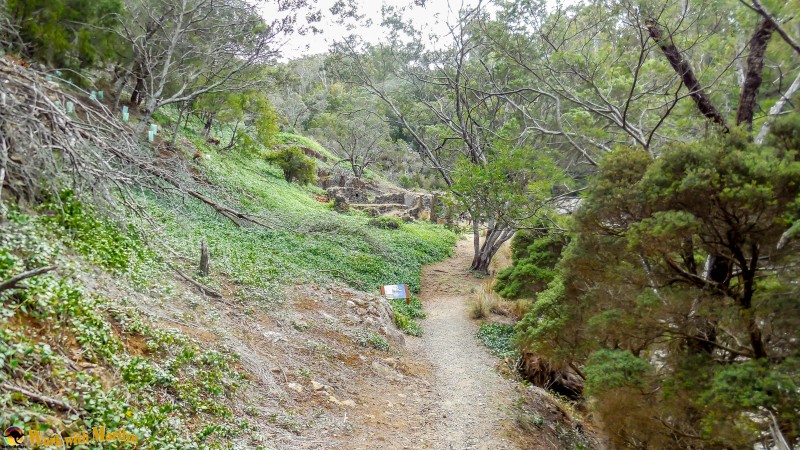 Around a few bends and there stood the ruins before us.  We were advised to keep to the formed walking track as the walls were unstable. They certainly looked solid enough to me but I wasn’t about to test it. 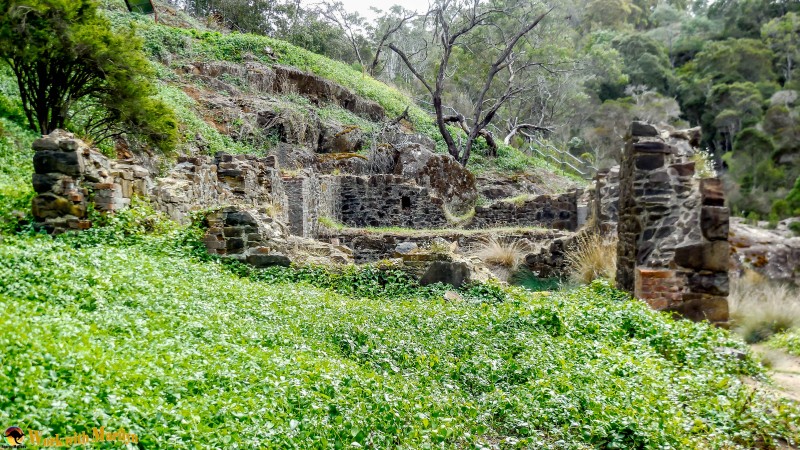 A closer view.  Not much left after being ravaged by fire and flood.  The building was built in 1825 and finally closed in 1889.

For possibly thousands of years before, the Pannarlapannaa people of the Tasmanian Aboriginal Community came here for drinking water, and to collect shellfish and swan eggs.

European explorers first visited the area in 1798 but it was in 1804 they stumbled upon this river as a “very good and convenient place for the watering of ships”.  They named it Supply River. 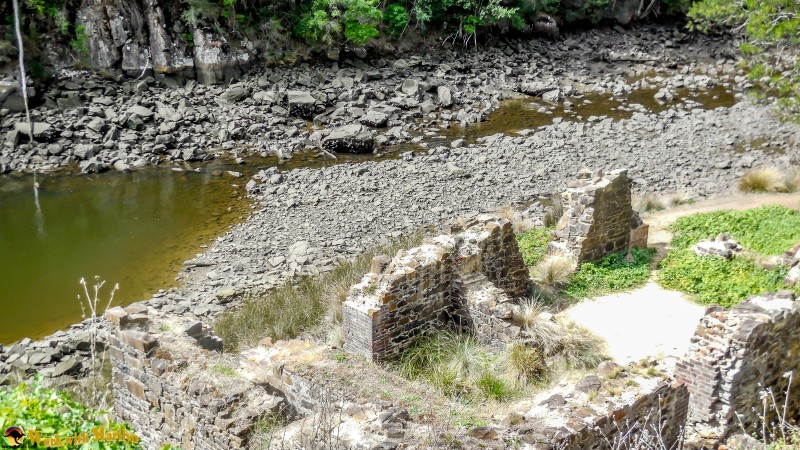 The Flour Mill had two large water wheels at work, one on the side and one to the back. It was the largest mill of its kind and was responsible for supplying the newfound Sydney colony.  But gradually steam-powered mills took over.

What a Great Place for a Swim! 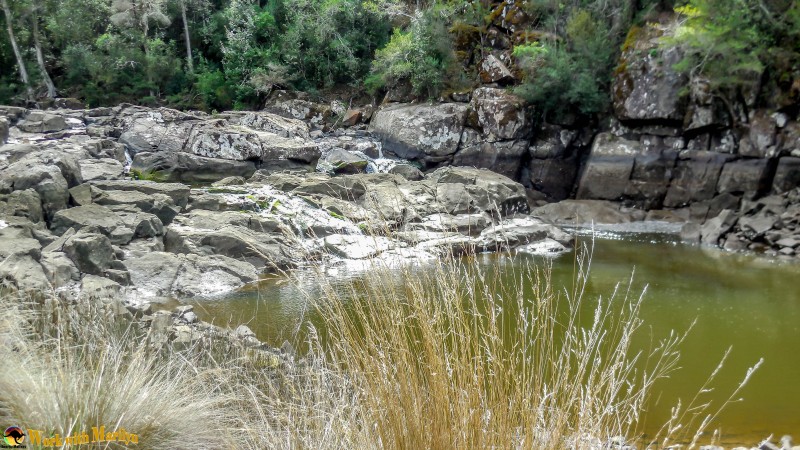 Directly in front of the Mill there was a nice swimming hole at low tide.  You can easily see the line where the tide reaches each day. Above this point it’s fresh water all the way. 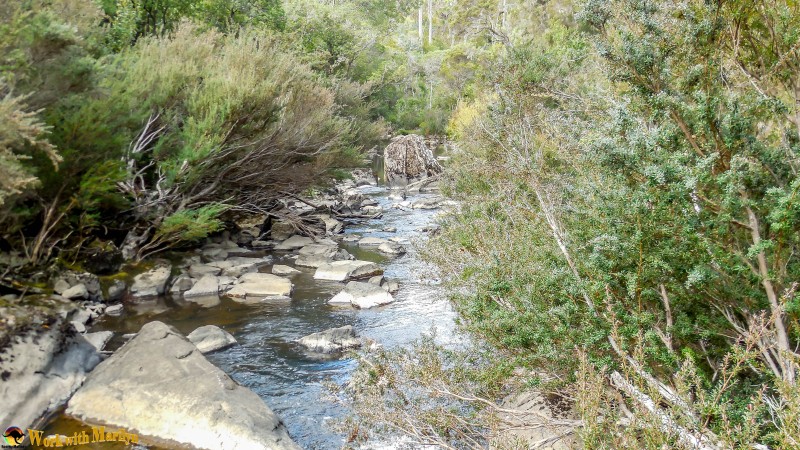 Taken a little upstream as we found our way to the ruins of the old weir.

Made by Aboriginals?  I Wonder! 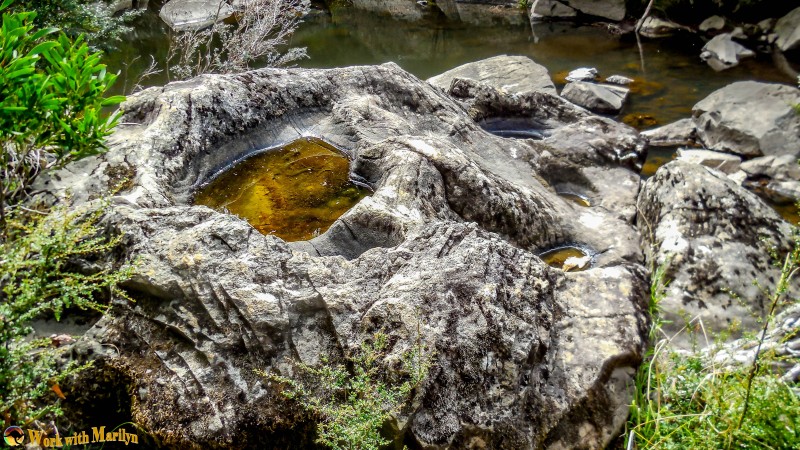 We found an interesting rock there which to me looked like it contained holes made by the Aborigines.  I haven’t been able to find any documentation that suggests that but they looked highly suspicious to me. 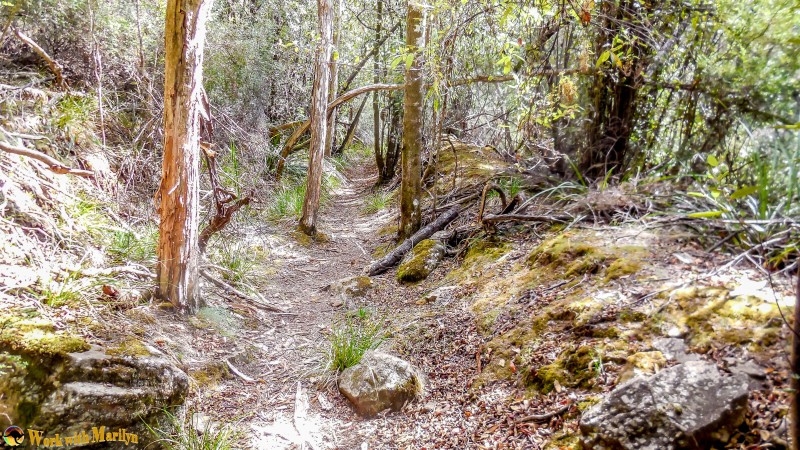 The track winds through the bush between the mill ruins and weir.  You can see how the land was hollowed out making a ridge between the track and the river.  This was the old water race that ran from the weir back to the mill to turn the water wheels.  I couldn’t quite follow how it worked but it was easy to see what they had done. 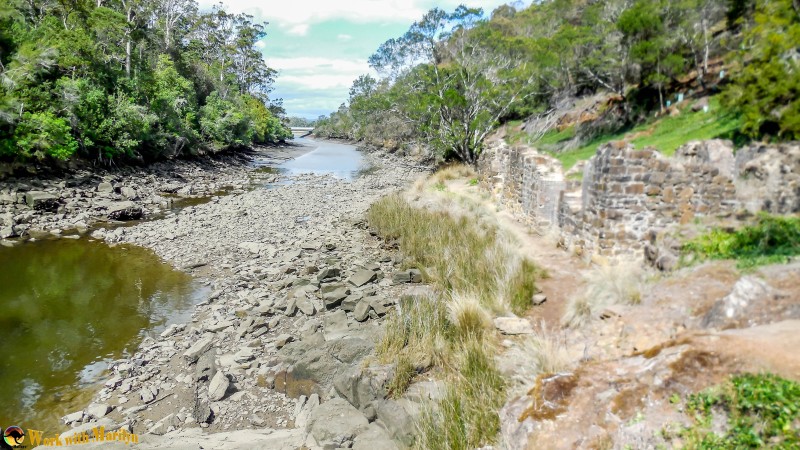 See the bridge in the distance?  As you can see it wasn’t far off the beaten track.

To see a picture of what the old mill looked like before it was destroyed, follow this link: Actual Supply River Mill.  You can see how the verandah came right up to the water’s edge.

Apparently there was only enough water coming down Supply River to run the mill for 8 months of the year.  Launceston and surrounds receives hardly any rain in the summer, so it’s easy to image the water drying up.

I found this wonderful video online where they used a drone to photograph the area.  It will give you a good idea.

We enjoyed some time clambering over the rocks just above the swimming hole.  A lovely little waterfall burbled its way through the rocks.  If I stayed there, when the tide came fully in I would be completely covered with water! 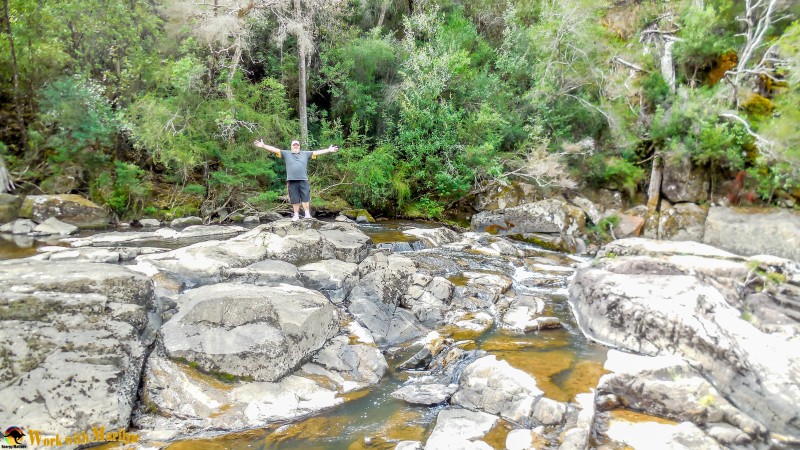 Here’s my husband Selwyn acting as if he’s on the top of the world!

Lovely Bird Life of the Area 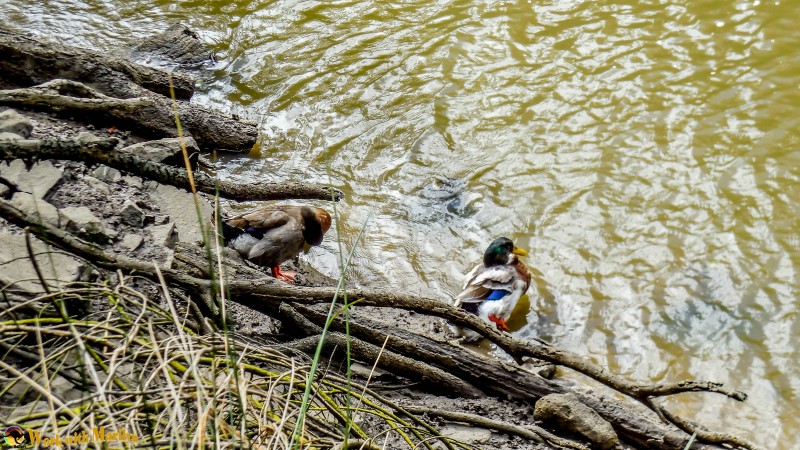 On our way back we were delighted to see some beautiful ducks sunning themselves.

A number of white faced heron were checking the shallow water or perched on the rocks looking for food.

Beautiful black swans swam gracefully by.  Did you know that all swans in the southern hemisphere are black?

A Short Walk But Oh So Much Fun! 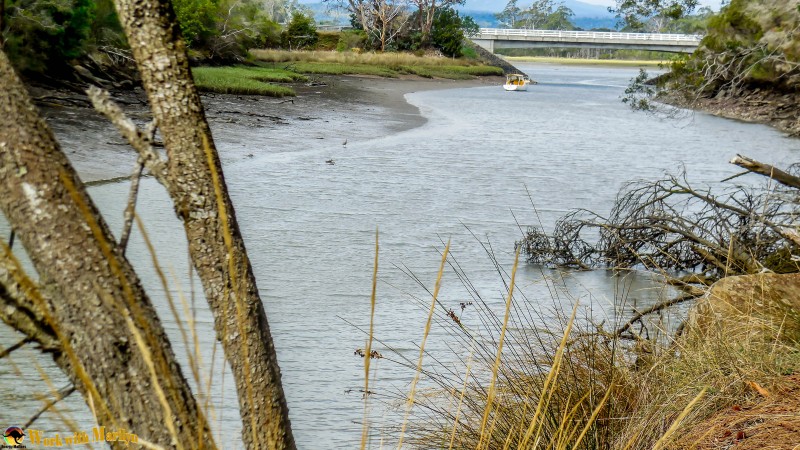 We didn’t feel we had been up there for all that long, but as you can see, the yellow and white boat had lifted off the mud and was now floating in the river.  The 3 metre tide had turned and was on its way in again. 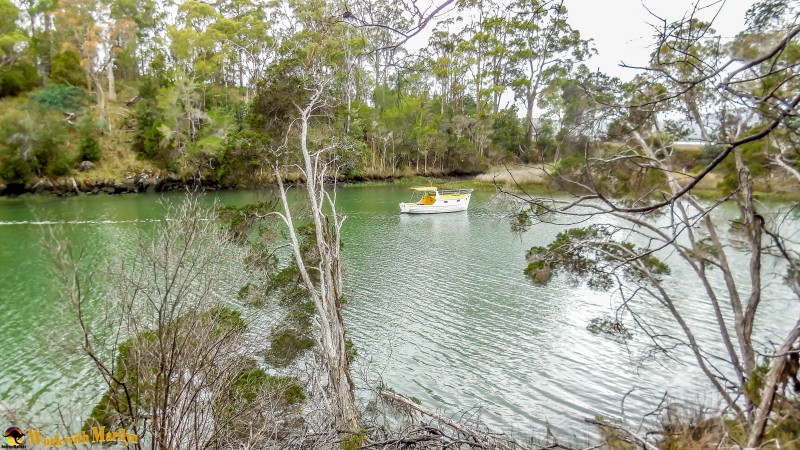 We slipped back up here two days later to see if we could catch it on the full tide.  As it turned out, the tide was on its way out again.  We’ll try again later.

How we enjoyed this experience with the water wheel flour mill.  How about you?  What wonderful benefits of walking exercise do you find?  Will you share them with me and my readers?  Please fill in the comment section below.