Ducks and love explains my personal experience with ducks and drakes on our property.

When I received my first five ducks, two of them turned out to be drakes.  Now, as you can imagine, two drakes and three ducks is not a good combination.  Even if it had been one drake to four ducks it still would not be sufficient. 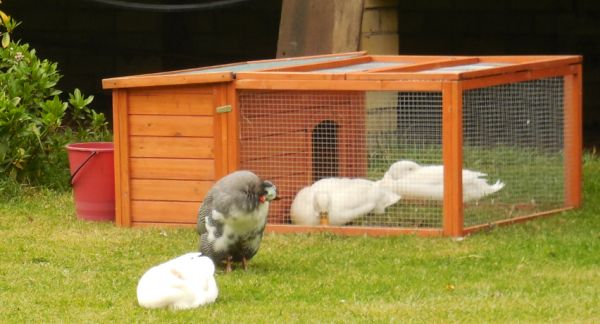 The drakes love the ducks to bits.  I’ve found them really quite caring, especially if one of the ducks gets injured, even if they are responsible, or if one is not well.  If I put one in the hospital, the drakes will come and sit as close as possible to them.

But, on the other hand, the guys are hard on the girls.

During mating, the drakes pull head and neck feathers off the girls.  In fact, they do quite a bit of this before they move into the more serious mating.  Once the feathers are removed and that area is bare, they still continue to grab that same place with their bill.  Of-course, they need to do this to be able to stay on top of the duck, but it usually results in a bleeding wound.

As you can imagine, the duck will yell and complain loudly, but from my observation, it only tends to excite the drake more.

Oh how I really dislike what I see!  I watch other birds mating and it appears to be a pleasant experience for the female.  The males are nice and gentle.  I’ve watched little female sparrows twittering with their wings spread, quite obviously enjoying the attention of the male as he hops on her over and over again.  I don’t see this in the duck world.

They have a what?

Did you know that drakes have a penis?  Not many birds do, but ducks, geese, swans, ostrich and emus apparently all sport a penis.  Well, it’s a ‘bird-type penis’ really… it looks like one but they grow a new one each year.  You can read more about that if you’re interested in Do Birds Have Penises and This is how ducks have sex.

Sometimes I’ve watched them on the dam as a female goes up to a male and begins much head-bobbing, or the beginning of courtship. She is initiating the experience and wants his attention.  In particular, I have one white duck, Snowy, who is always flirting with the boys.

They run for their lives!

But more often than not what I see (and hear) is my ducks running for their lives trying to get away from the advancing drake.  When he catches her, if there is even the slightest chance she can get up and run, she will.

This type of behaviour is more likely to happen if she’s missing feathers as she knows that what he wants to do will hurt!

There are occasions when I see the two drakes interested in the same female.  One is on top of her while the other pulls at her head feathers.  Sometimes the first one will get off and the other will hop on.  On other occasions, I see copulation with one drake and as soon as it’s over, the other drake races after her for his turn.  Oh dear!

When ‘the act’ is over, the drake let’s himself fall to the side, still holding on to her head feathers. This pulling really hurts as she winces in pain.  As he removes himself from inside her, he then lets her go.  As soon as he’s up, he’ll run over to where the other male is, as fast as he can, while she get’s up and flaps her wings, happy the experience is over, I think.

If they are down in the dam, as soon as it’s over they will wash themselves.  They get in and have a good splash and preen their feathers.  It’s lovely to watch.

Will he drown her?

The two males are ever so close.  They go everywhere together and are hardly ever apart except when they are chasing a female.

In the almost five years that I’ve had these birds, I’ve only ever once seen a disagreement between the two drakes.  This last season, the two of them were fighting for around about a week, obviously sorting out who was going to be the dominant bird. 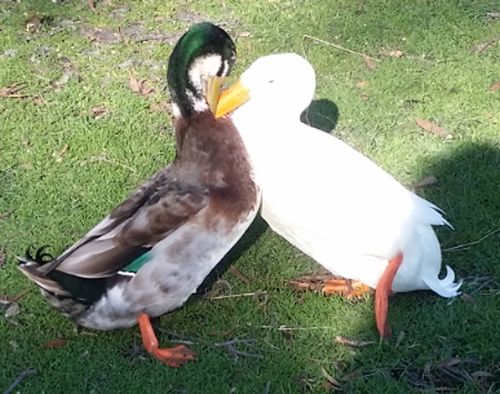 The nice thing about all this is that drakes fighting is nothing to be worried about at all.  They are not like roosters that draw blood and can cause awful injuries.  Drakes basically push their chests against each other and butt their bills.  It’s more of a time of pushing than anything else.

Once they got it sorted, they were back to being best buddies again.

As I cannot stand my ducks being hurt in this fashion, I now tend to keep the drakes locked up until midday or one o’clock.  Then at that time, I lock up most of the ducks and let the drakes out.

I need to mention here that as time went on I added to my collection of ducks.  I bought more in and we’ve also had ducklings raised here on the property.  But even this doesn’t completely help as the drakes have their favourites!  The favourite ducks will have their feathers pulled while the others remain untouched.  So I lock up all the favourites and leave out the unfavoured for the drakes in the afternoon.

I have one duck, I call her Mrs Brown.  She is one of my originals and very close to the two boys.  She wants to be with them all the time.  The funny thing is that she never shows any signs of feathers missing.  In fact, I’ve only ever seen a drake mate with her once.  Of-course it could happen a whole lot more, but I’ve never seen her running away, calling out or any feathers missing.

I decided to go and video some of the action.  Here is Teal mating with one of the ducks but as I approached with the video he was frightened off.  He ran helter-skelter to the dam and immediately jumped onto Mrs Brown!  So there you have it… the second time ever that I’ve seen a drake mate with her!

The boys are keen!

Because of the locking up, the boys are pretty keen when I let them out.  The unfavoured ducks soon start yelling their protest when they see the boys coming.  But they have all managed to hold on to most of their feathers so I don’t worry about them.

Once the other duck’s heads heal up quite considerable, I’ll let them all be together for a time.  It usually doesn’t take more than a day or so before I need to lock them up again. though.

There are four favoured ducks… Swiss, Cheese, Snowy and Ozzy.  I’ve seen Ozzy on many occasions hold back in the pen as she listens to all the other ducks complaining about the drakes’ attention.  She simply stands there and waits as she knows that the drakes will quickly take one or two of the other girls and hopefully, they’ll leave her alone.

That shows me a special intelligence which is not displayed by the other ducks as they run out, straight into the clutches of the drakes, but the complain when they do.

Apparently ducks are also able to block off sperm from any drakes other than their chosen one.  Here I see some evidence of it because Ozzi had Toby mating with her as well as Teal.  Not one of the ducklings took after Toby, a totally white Pekin.

Should I find a new home?

I’ve been considering finding a new home for one of the drakes and only having one for my girls.  It’s hard though, as both boys are so very close, I think they’d find it difficult to come to terms with.  I have been thinking I’d find a home for Teal and send Mrs Brown with him.  At least he’d have one duck he was familiar with in his new surroundings.

I’ve read quite a bit online on how many have a much larger drake to duck ratio than I have found works for me.  I’d be ever so happy to keep both my boys if only they could stop inflicting so much pain on the girls.

Ducks are very family orientated and maintain close relationships with their mother or siblings.  For example, Swiss is mum to Cheese.  By the way, these ducks were not named by me as they already had their names when I bought them… Swiss Cheese!

These two ducks are pretty much always together.  Ozzy is mum to ‘the triplets’, and it’s not very often you see them apart.  This same reason is most probably the reason that Mrs Brown is very close to Teal & Toby… I believe they are all siblings.

It appears to me that some people have different experiences with ducks and love than what I do.  All I can do is relate exactly as it is for me.  Maybe you would like to tell me some of your experiences with these lovely, happy birds.