Guinea Fowl Young tells the real life story of a couple of my Guinea Fowl.

My latest male addition to my Guinea Fowl flock is called Stirling.  When I purchased him, I was a female down, and needed to equalise them out by giving each male at least one female.  The problem was that my new female turned out to be a male!

So this made the situation worse.  As he was continually fighting with one of the other males (over a female) I decided to purchase another female and lock them up together to bond for two weeks.  In the mean time, I had one of my other males die of unknown reasons, so I needed to do some fixing up.

The new female was called Pearl and they fairly instantly took a liking for each other.

This is the only photo I managed to get of them.  It’s while they were still locked up and bonding. The photo was taken just a day or so before I let them out.

At the end of two weeks I let them out but although they spent a day or so wandering around our property, the next day they disappeared and I didn’t have any idea which direction they went.

I didn’t see either of them again as they made no attempt to return home. Really, I thought they had gone forever.

Originally when my Guinea Fowl disappeared, after my initial disappointment, I decided to bless them and let them go.  I said to myself that if they are not happy living here, at least they are together and would be able to start their own little family together.  I hardly dared hope that I would ever see them again.

One day, about six weeks later, Stirling suddenly appeared!  I was so thrilled to see him, but a little upset that Pearl wasn’t with him.

After a couple of days, he again disappeared.  Then a few days later he returned.  He did this a few times.  Sometimes I’d lock him up for the night with the others.

By this time, about nine to ten weeks had past.  I would always wonder where he was going when he disappeared.  I developed a little story within my own head…

“Stirling was returning to his little wife who was sitting on a nest of eggs and one day he would bring them all home.”

The appearance of Guinea Fowl Young

One day I had been out for the first half of the morning.  On my return I could hear quite a lot of calling from a guinea fowl male… or two.  On investigation, I first ascertained that it wasn’t any of my own guinea fowl as they were all in a huddle around Penny who was sitting of a small clutch of eggs.

I listened carefully… yes, I could definitely hear two guinea fowl over in the neighbour’s large paddock, but I couldn’t see them. 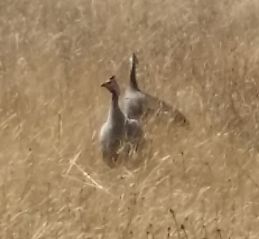 I decided to go for a walk along our road to see if I could see them further down.

Oh… there they both were… not only Stirling, but I could see Pearl with him as well.  I was so excited.

It appeared to me that Stirling was trying to lead Pearl back to our property.  He kept on calling out, and she would respond, but she seemed to move slowly.

In this small video you can see how she suddenly flew up and over to a fence.  She was alone… or did she leave her little one’s behind?  At no stage could I see anything other than the two parents.

After taking some photos, I got back to my work and waited to see the outcome.

Later on in the early part of the afternoon, I decided to wander down to see if I could see them.  Wow… there they both were, both Stirling and Pearl… and 15 tiny little keets!

Now I was really amazed!  And… I could understand why it was the Pearl was moving so slowly through the long grass.  She had 15, obviously one day old, babies to attend to.

By later in the afternoon, they were all gone again, and now three days later I’ve not seen them since.

If, per chance, I don’t ever do see them again, the thing I’m so blessed by is the fact that the parents brought home their young to show us all.  My other Guinea Fowl were fascinated with them.

I blessed them and let them go

My little imagination of what was happening actually came true.  Pearl was busy laying for quite a number of weeks, and I would say that Stirling didn’t come back to visit with me and the others until he felt bored with her sitting all the time on the nest.

Anyway, it was obvious he was as proud as punch with his family.

Now it would be interesting to know how many survive.  They were moving about in very long grass and it’s been raining, so we’ll have to wait and see.

Stirling and Pearl returning home with their Guinea Fowl young totally and completely blessed me.  It was so wonderful to see that she was still fine and they were a very happy couple.

Have you ever had these kind of experiences? Gosh I’d love for you to share with us.