Guinea Fowl Facts: Breeding Season is a continuing chapter in the ongoing story about my guinea fowls.  As I learn… I share.  Today we’ll have a look at what went on during the breeding season.

Although they are fairly tiny, I guess more like a bantam egg, the taste is exquisite.  They have the brightest deep yellow yolks and you can almost feel them doing you good.  In reality, they have more Vitamin A, B’s, D3 & E than chicken eggs, coming in at about double.  As I have observed they eat a tremendous amount of green as they spend all day pecking the grass… in our case, the lawns.

Guinea Fowl don’t worry your garden the way chickens do.  Of-course, they love eating bugs and I don’t think there would be a nasty bug left in our lawn, what with the ducks, chickens and guinea fowl feeding there all day.

They are more hesitant about what they eat, looking carefully at anything that’s new to them.  A chicken will run up and grab it straight off, but the guinea fowl has to decide whether it’s food or not. 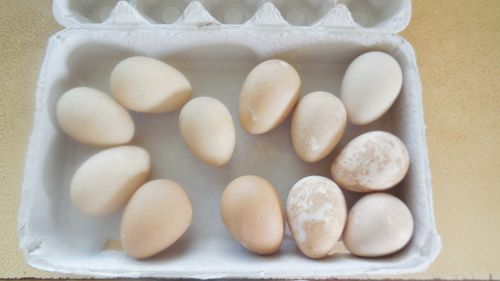 The egg shell is much harder than a chicken, or even a duck egg.  You really have to give them a good rap to crack them. They have a thick shell and no two eggs look the same.  I can’t speak for other guinea fowl eggs, but mine come in a variety of muted colours with a lot of them covered in brown specks. They are quite different in shape also.  I’ve heard them called “triangular” or “pear shaped”, but once you’ve seen one you will always know when you pick up a guinea fowl egg.

I find they keep well in the fridge as we were eating them for many weeks after they stopped laying.  Unlike chickens and ducks, they don’t lay for most of the year, having a specified season over the summer period, starting in Spring and ending in early Autumn… a good 6 or 7 months or so.

Keeping guineas is definitely not for everyone.

As I’ve stated in my other posts, you cannot keep them if you have neighbours all around you.  They are very vocal with a varied repertoire of sounds… everything from a gentle chirp that reminds me a little of a canary, through to an alarm call they use to chase off predators such as hawks high up in the sky.  I find when I’m feeding them at night they make a loud whinging sound in their anxiety for their food.

What do they eat?

The amount of food they eat is very little.  I have a scoop, I guess it would hold about 500g at most, and half of one of those feeds all eight of my guineas.  I’ve heard it said that you really don’t have to feed them as they can be quite self sufficient.  Not sure my guys would agree with that as they really look forward to their tucker just before they settle down for the night.

As to what I feed them, I find a mix that’s designed for my chickens is the most favoured by them.  When they were little they ate a special wild game mix but on maturing I find they really love wheat.  It’s the best as far as they are concerned, but there are other small seeds mixed through it.  Larger kernals such as corn gets thrown aside in disgust, in fact, they don’t like anything they consider too big.

Guinea Fowl Facts: Breeding Season … So where do they lay these wonderful eggs?

I found their egg laying pretty consistent once they began… oh, those little pointed eggs which taste absolutely delicious!

Most of the time my guinea fowls were happy to lay where everyone else was laying.  They didn’t mind if it was a duck nest, or a chicken nest.  Sometimes they’d make their own nest near the vegetable patch for example, and then the chickens would find it and use it too.  But I didn’t ever find they wandered far off to make nests where we couldn’t find them, as I’d read in other blogs can happen.

When the female lays an egg, the male stands by for protection.  He won’t leave until the job was done.  In the case of the group of one female with two males, both males stand guard.  I noticed once when Grace was up in a place she was finding it difficult to get out of so she began calling… both the males came running to her aid.  It was really nice to see.

I was delighted that they could form a group with two males and one female.  Actually I didn’t think for a moment it could ever happen as the males fight for their girl… but this male invited him into the circle and they remained close buddies for the remainder of the breeding season.

I remember seeing once where a chicken was busy trying to lay an egg and a guinea decided she had to lay one in the same nest.  She began walking all over the chicken, who became most upset  and indignant, and couldn’t concentrate on the job!  She not only had the female walking on her back but the male was coming at her trying to chase her off.  In the end she ran out of there as if she had a ghost chasing her… have no idea if her egg had been laid or not! 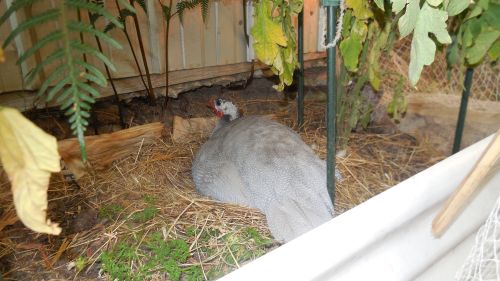 Every day I collect the eggs… sometimes morning and evening.  I don’t want a guinea fowl hen hatching a breed as by all reports they don’t make good mothers.  Anyway, having eight already I wasn’t looking to have more.  We have four females but only Lavender has tried to sit.

All through the breeding season, once they sort out who was to be with who, the groups go their separate ways.  On our 3 acre property there is plenty of room for the eight of them to spread out and spend time alone together.

As I have mentioned elsewhere, the groups turned out to be, after much chasing and fighting:

They must mate in a quiet place

One thing I can say though… not once during the breeding season, or any other time for that matter, have I ever seen any of them mate.  Really don’t know when they do it!  I mean, the ducks and roosters are “in your face”, but I find it quite fascinating really as to when the guineas mate.  I know their eggs are fertilized though, there was no problem there. (Additional note:  I have finally caught a pair of guinea fowls mating… ha ha!)

It’s been a complete learning experience for me watching them go through their different stages.  I can think of two stages yet to come… post breeding season – will they move around as one happy group, and what happens next breeding season… will they form the same groups?  Will they fight it all out again?  Until I’ve moved through these stages with them, I cannot answer so keep watching as I update as I go.

Nutritious Eggs right in my own Backyard!

I love having my own free-range birds supplying me with more than sufficient fresh eggs, full of goodness and taste, being most unlike those you buy at the supermarket.

Here are my other posts on Guinea Fowl as I’ve experienced them:

I hope you’ve learned some things as you’ve read Guinea Fowl Facts – Breeding Season.  I’ll continue to update as the seasons progress.  Please don’t hesitate to leave a comment or ask a question.  I will answer you whether I know the answer or not according to my experience.  But, it would be interesting to try and find out.